Start typing and press
Enter to search
Skip to content

Today was a pretty chill day in the city. And I mean that literally and figuratively… This morning, is was zero degrees and during the day is got to be in the teens. At least it wasn’t too windy, yesterday was brutal because of the winds. My dad came in from Miami last night, so of course he had to get us up and running and on the go as soon as he was ready. We started our day at a cute little brunch place in Central Park called Sarabeth’s; they have the best tomato soup I’ve ever had. After brunch, we just killed a bunch of time by stopping in every store down 5th Ave and did some serious wishful thinking. The watches we saw were priced on average around $18,000. I kid you not. We stopped in Valentino, Tiffany’s, Omega, Cartier, etc. etc. Hey boys, if any of you are reading this and just so happen to be my future husband, hit up Tiffany’s for that engagement ring. Plz&thnx. My dad was more excited to go into the designer stores than we were; he’s a shopper. I guess I get it from him. Tonight, while my parents went to the best Greek restaurant in the US (Molyvo’s), my sisters and I went to see Wicked. The single most wonderful show ever to be put on Broadway. If you know me, you know how compulsively, irrevocably, totally and completely obsessed with it I am. The first time I saw the show, I was 10 and it was my first time in New York. Kristen Chenoweth was still playing Glinda so obviously it was epic… I fell in love and haven’t stopped singing the sound track ever sense. Amelia saw it for the first time tonight and we got the actress who plays Nesa Rose’s autograph! She looks like Emma Watson and was so so sweet. Moral of the story is I can’t get enough of Wicked. So if you ever want to hear or have any questions about it, come find me..  I’ve seen it three times and would so easily go back for a fourth tomorrow if I could. But onto the outfits.

Amelia did some more layering today; using the same fur lined jacket she wore on Saturday, she put a short sleeved leather shirt under it and another light jacket over it. The thick shirt blocked out the wind. The army jacket added some more color and a new style to the look. The black shirt and black jeans make her look slim, which is necessary when wearing so many layers and such a thick coat. If you can see them, those earmuffs go around the back of your neck and are basically just a net that covers your ears to keep the out the wind. They’re awesome! The brown suede boots match the brown suede in the fur lined jacket, and the suede against the leather gives the outfit a lot of texture but isn’t overkill. 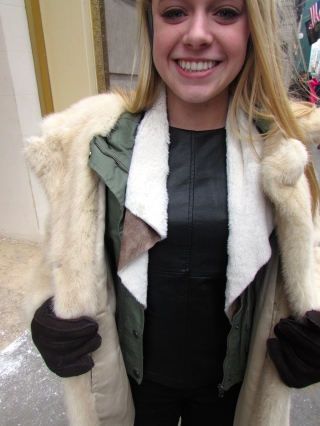 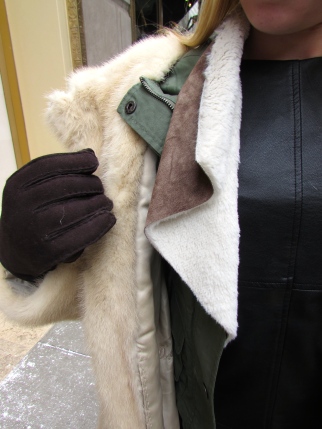 Hey Elise, I think you have some lipstick on your teeth… She’s wearing something very similar to what she wore on the way up here: the same sweater, denim jacket, and hat, but different accessories. The black denim jeans make her look lean, while the slip on snake skin shoes continue the line and are perfect for walking miles around New York. The white pashmina is dainty, so it doesn’t add too much bulk. Wearing the denim jacket around her waist doesn’t really act as a source of heat, but it does accentuate her waist. The bright lipstick matches the red stripe in her sweater, adding some color to the fairly monochrome outfit. 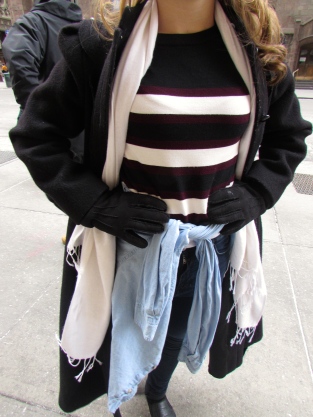 Okay I know that purple and red usually clash but there are two reasons why this is okay: 1) the purple is subtle and the gloves aren’t put directly up against the shirt, 2) these are the only gloves I brought. Because this shirt is oversized, and I have to wear things as slimming as possible, I wore my black Loft leggings (with some long johns underneath). This shirt has a cowl neck but it’s hidden by my faux fur scarf. The scarf is grey, but looks lavender up against my plum shirt. Somehow I survived the day in my wedged boots but they were surprisingly bearable and extremely warm. They gave me some height that was usually taken away from these long coats I’ve been wearing. Wearing a hat would’ve restricted my movement, so I opted for these faux fur earmuffs. 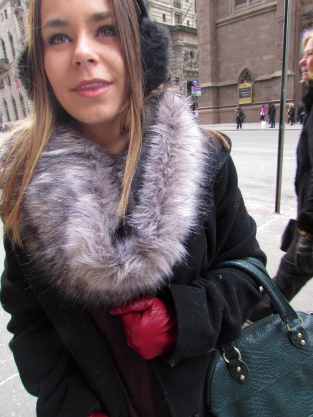 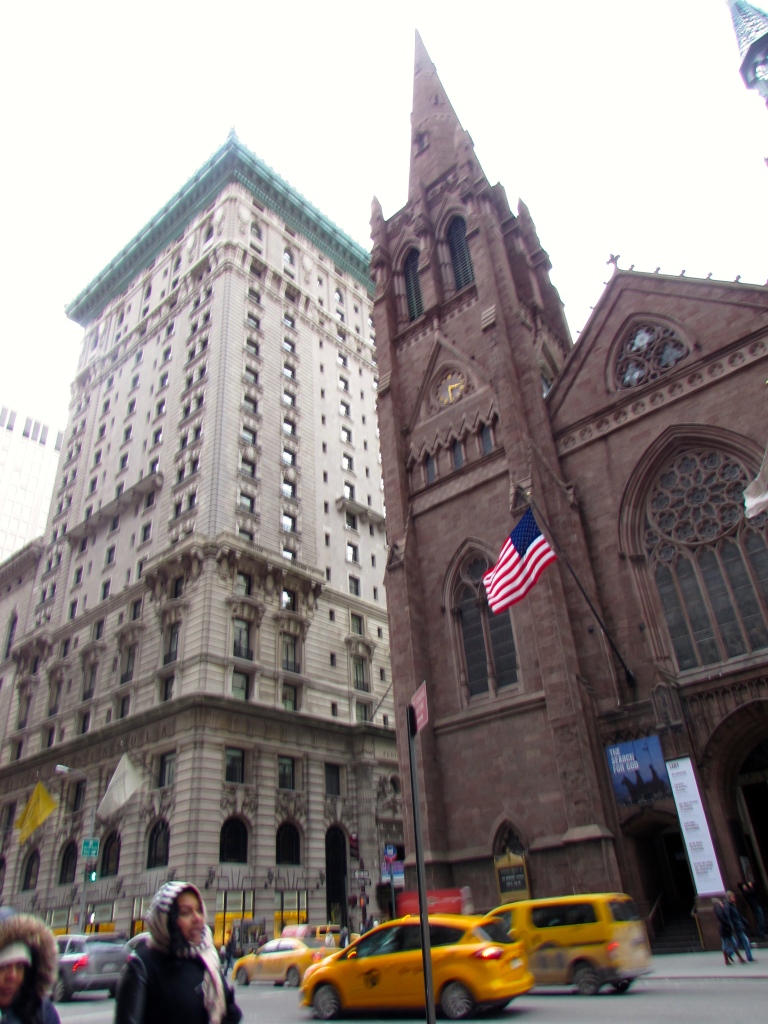 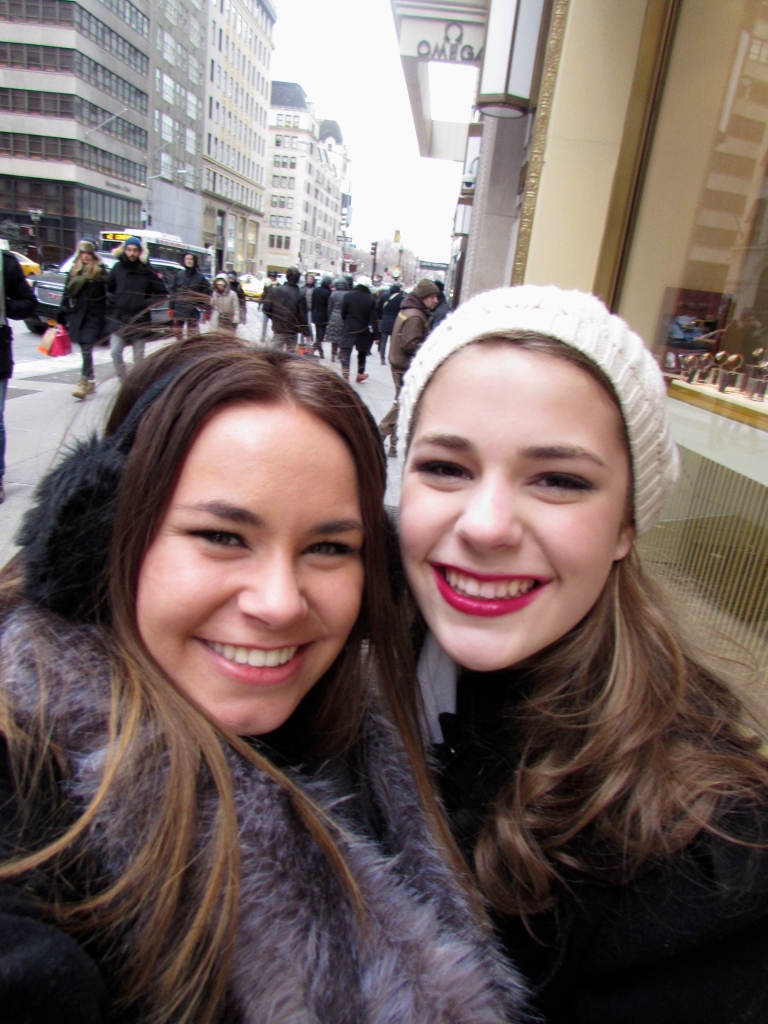 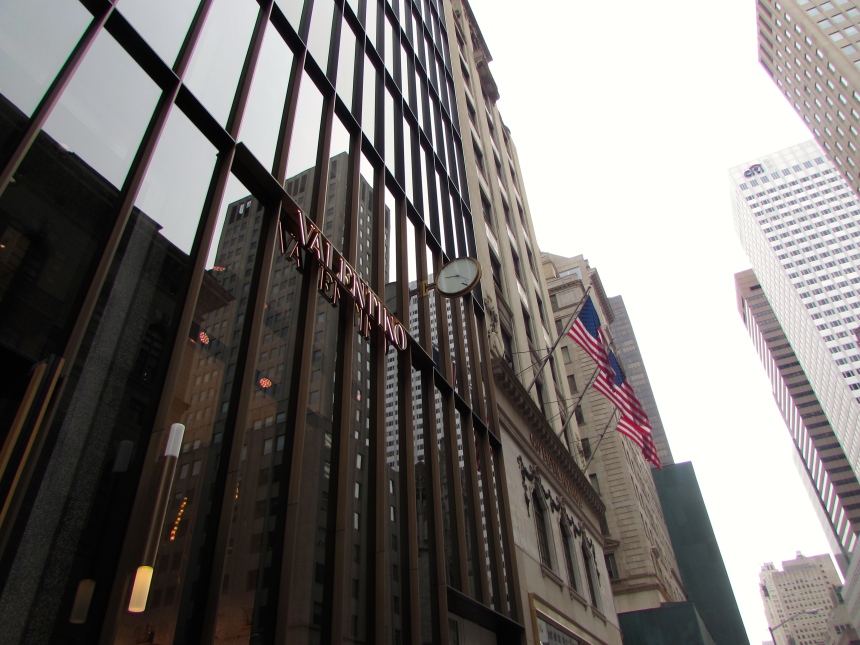 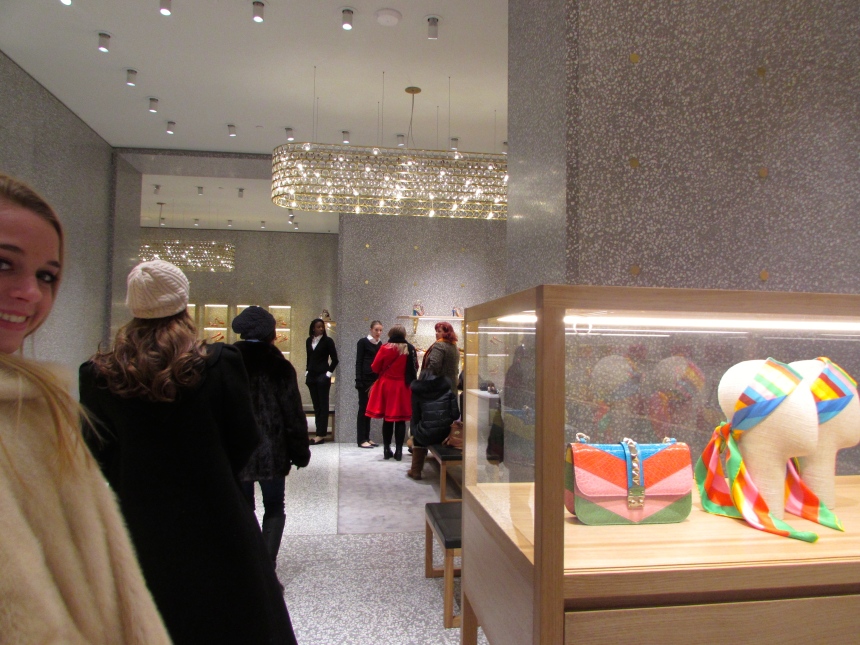 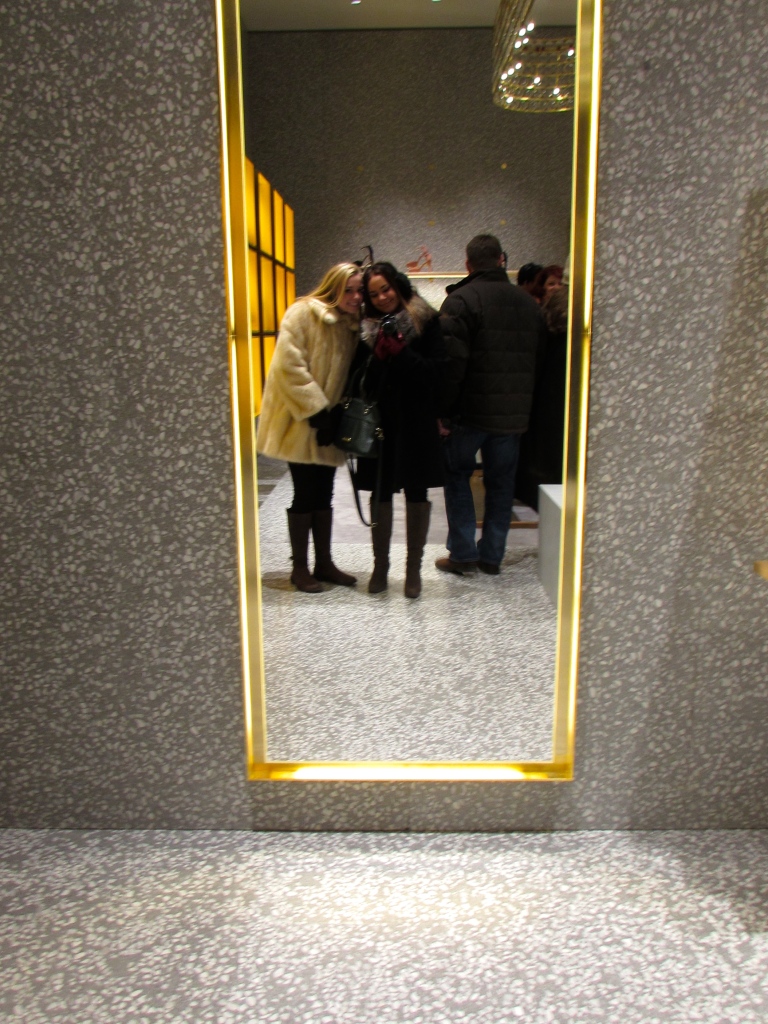 Mirror pics because why not? It’s not everyday that you’re in the presence of $1,000 heels. 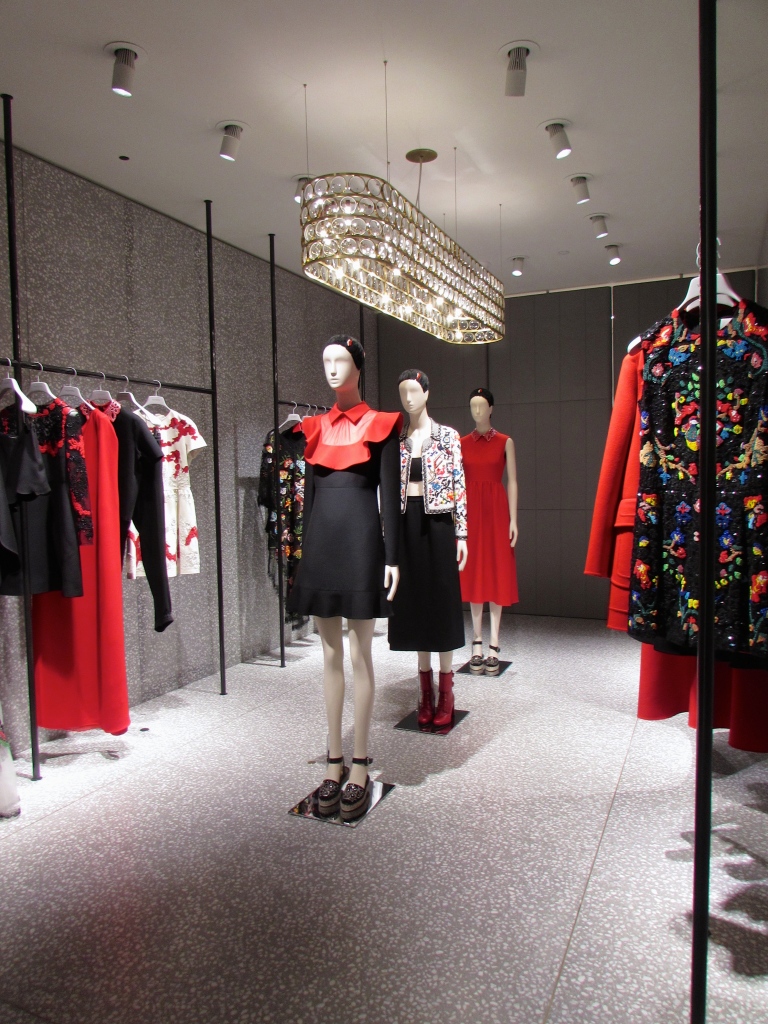 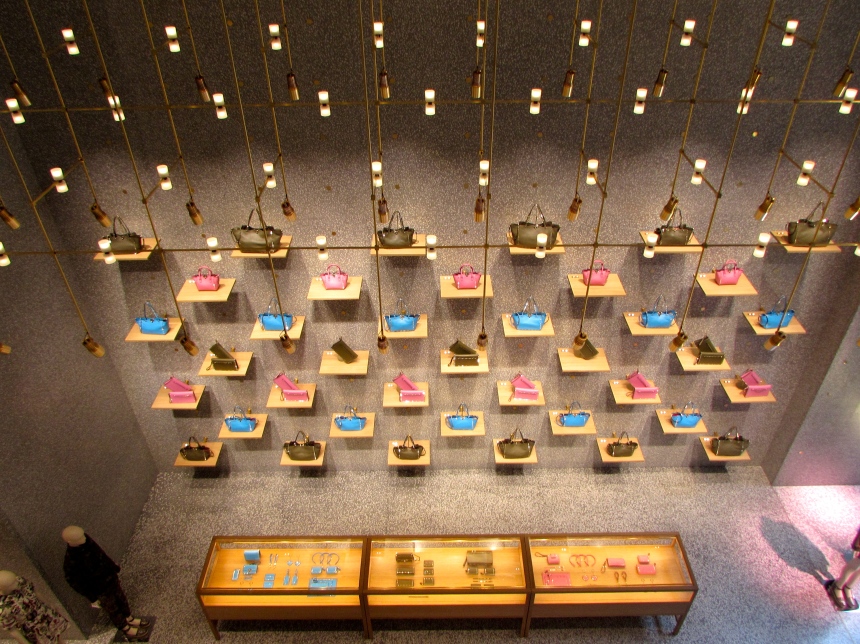 Dad’s favorite person ever is Kanye West (he is the most anti-Kanye person I know), and today while we were in Valentino he stepped into the men’s section and said, “Kanye West, more like Matty South”. He loves to mock men’s designer fashions. But I don’t blame him, some of the menswear in Valentino was either tan suede with butterfly patchwork or red camouflage… 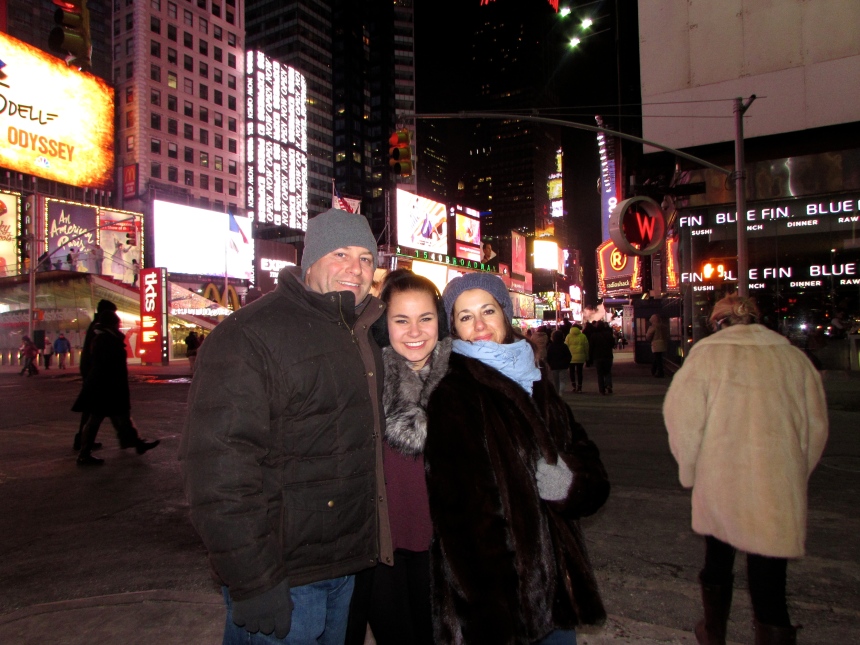 Mom insisted that it was too cold for her to smile. 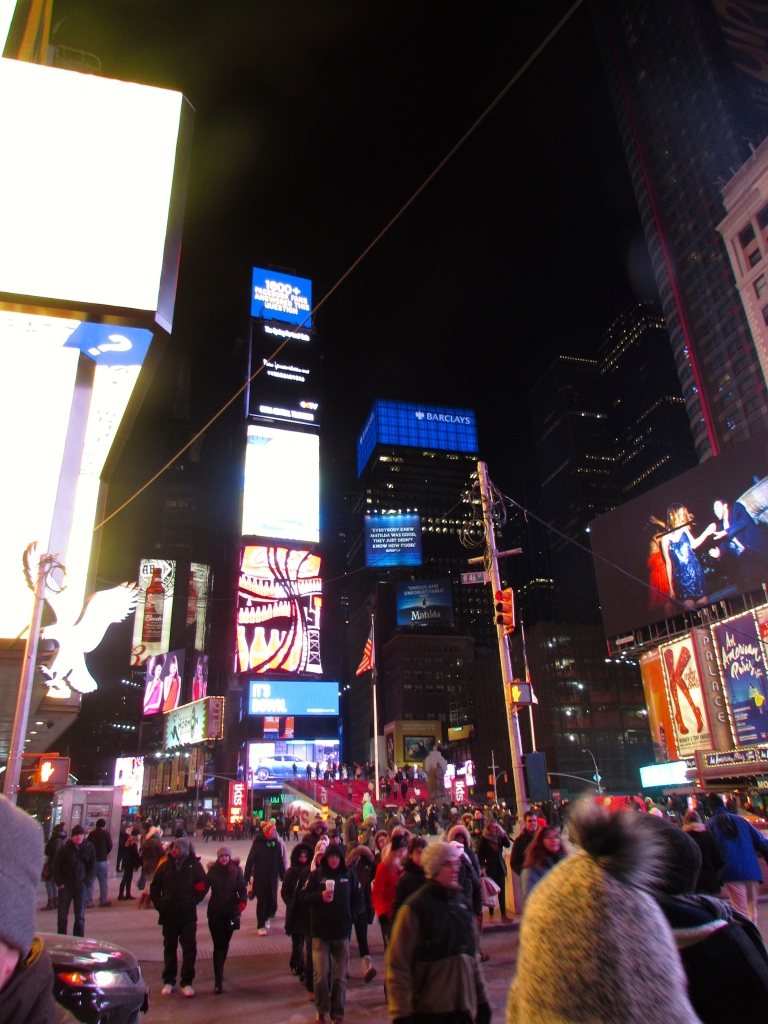 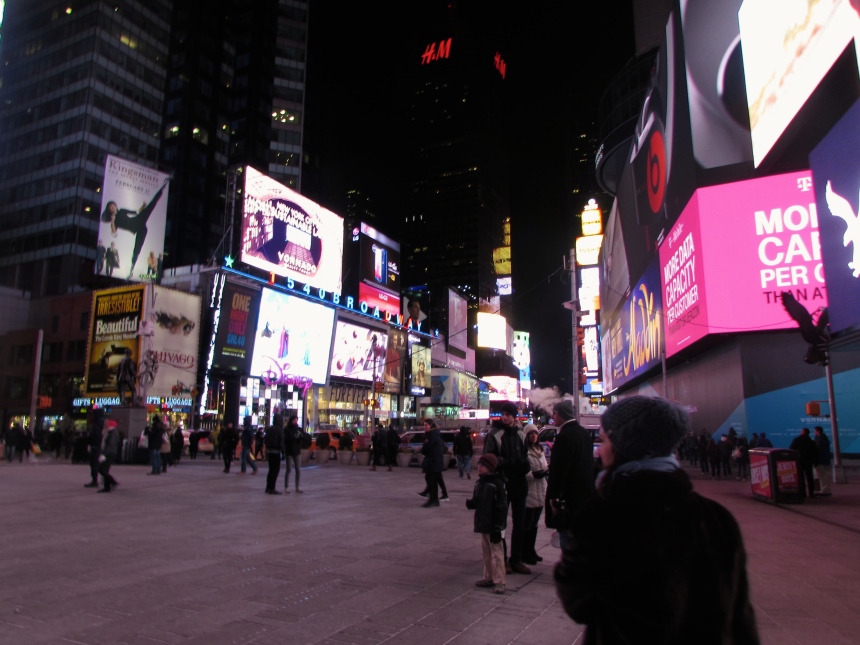 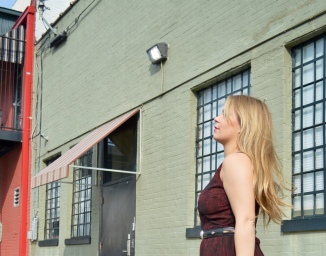 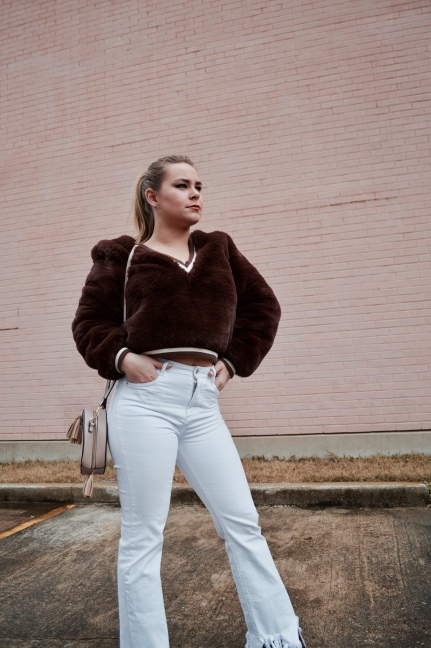 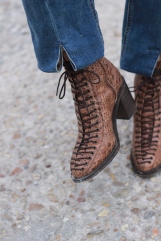 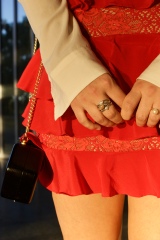 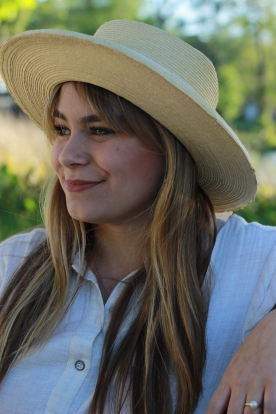 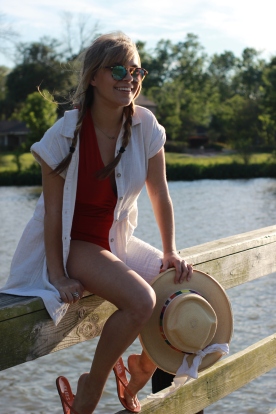 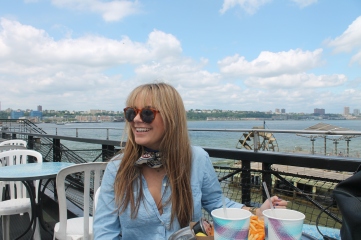 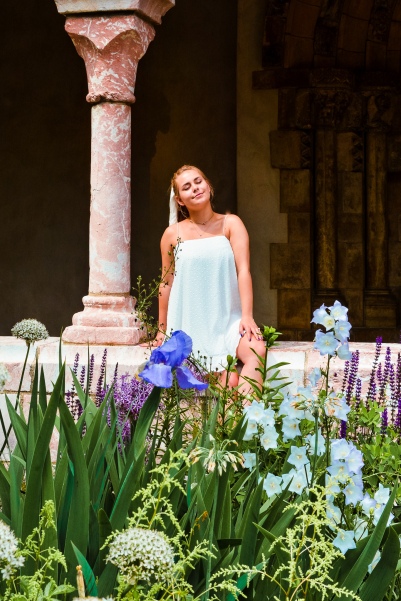 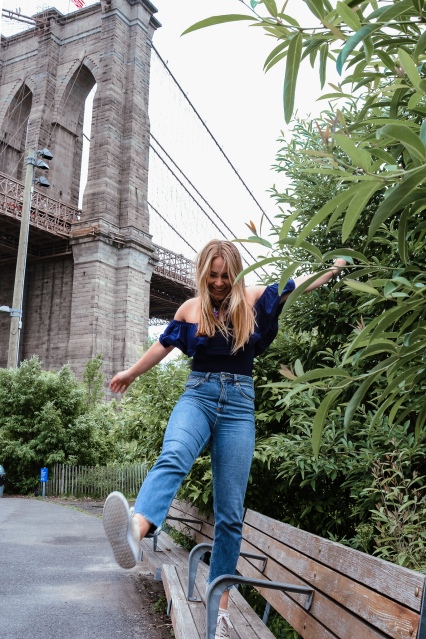